The developed countries of North America and Europe continue to experience record highs atflInterest rates and their interest rates are following the upward trend in hopes that the measure will help prices cool. high infllilac discourages more consumption by households and businesses, which drives down overall GDP. And this pulls the developed world into a possible situation of stagnationflation — stagnant growth with high inflation — this year. 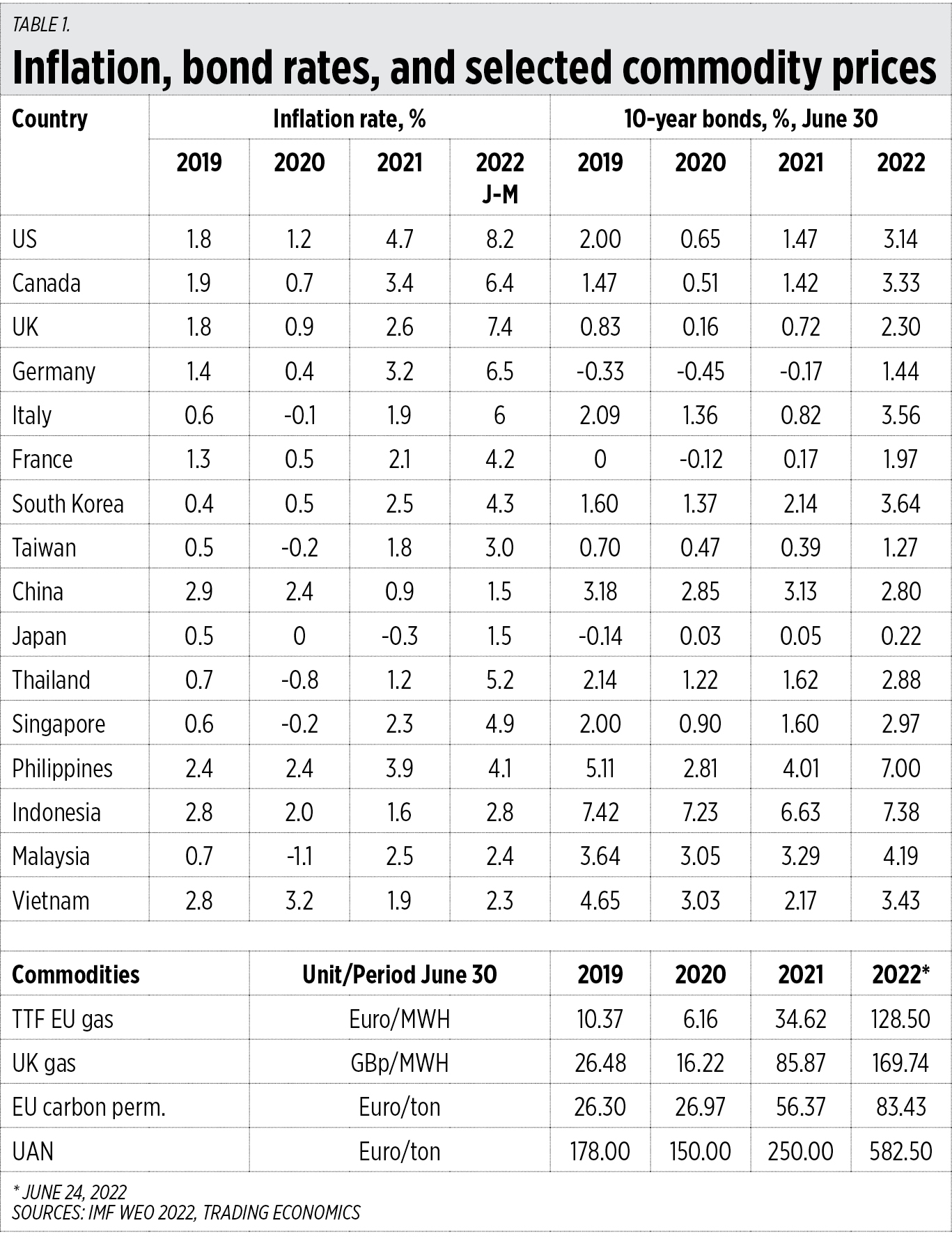 This trend towards high energy, fertilizer and food prices in Europe and America is not transient, but medium to long term. There has been a long, decades-old demonization and underinvestment in fossil fuels (oil, gas, coal) and crude oil refineries in the West and it will take at least half a decade of reinvestment in fossil fuels to expand production and refineries, especially for diesel, fertilizers and other petrochemical products.

A big challenge for the Philippines and our ASEAN neighbors is how to attract many American and European companies that will leave their continents and go to Asia, where hundreds of millions of consumers and where inflThe rates and electricity prices are not as bad as theirs.

The incoming government of Ferdinand Marcos Jr. could attract many of these migrant companies from the West – provided we don’t do what their governments did: over-tax and over-regulate fossil fuels, impose expensive carbon licenses, and under-invest in exploration, extraction and recycling.finery.

In short, avoid or delay climate-related regulations and taxes. Europe is now realizing that. The threat of power outages and high food prices is much scarier today than a hypothetical climate catastrophe in 50 or 100 years.

LAND TRANSPORT WOES
A report by News5 TV and Radyo Singko 92.3 News FM on June 10 showed very long lines of commuters in Metro Manila wanting to ride jeepneys, vans and buses. Then a friend who has a rented van noted that the last time the Department of Transportation (DoTr) and Land Transportation Franchising and Regulatory Board (LTFRB) released a van franchise was in 2013, instead of expanding the number of van franchises , they prefer to keep the supply of legal vans small, so that the supply of non-franchise vans will naturally increase due to the high passenger demand, and then keep these “colorum” vans that give room for corruption because the fine can go up to P200,000.

The same LTFRB also limits and puts a limit on the number of technology-based ride-sharing cars and motorcycles. Rather than expanding the number of motorcycle taxis (MCT) and transportation network companies (TNCs), the agency narrowed the industry down to a few favorite players. Vans, TNC cars and MCTs can take their passengers directly to their departurefice buildings so they don’t have to drive their car, which adds to trafficfic congestion and enduring expensive oil and parking.

The latest public data from the DoTr Land Transportation Office (LTO) shows that private vehicle registrations in January-March (JM) this year were almost half of those in full year 2020 and about a third of registrations for full year 2019, but there are few new buses (see table 2† This means more trafficfic congestion from cars, SUVs, AUVs and motorcycles, coupled with increased commuting because they can’t drive faster and more comfortably. 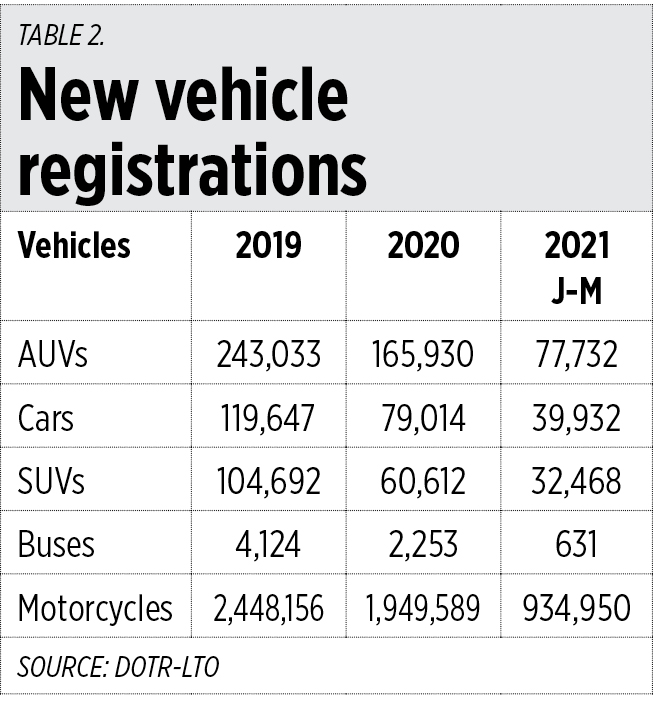 While the outgoing DoTr leadership may punish unfortunate passengers without vaccination cards in their recent “no vax card, no ride” policy, they cannot control the leadership of the LTFRB, an agency under the DoTr, when it comes to this ongoing practice of restricting the supply of legal vans, TNCs and MCTs.

Good thing this political class all leaves on June 30th after inflwreak havoc on the commuter class. I hope the new leaders of the DoTr, LTFRB, LTO and other agencies will not follow their policies. Transport competition is good for commuters and the country.

More choices, more options in vehicle types, faster mobility at competitive rates. This is what the public needs and I hope the new government will support this public need.

FIBER INTERNET
Fortunately, there are now many internet companies offering fiber optic services in the Philippines. Until last year we had PLDT DSL internet at home and that could be slow at times. Then we tried Globe broadband prepaid, and saw that it can be fast, but the charge is easily consumed.

A friend referred me to his friends at Red Fiber and gave them my cell number and address. Within an hour I got a call, the lady explained to me the Internet package and Red Fiber promos, then I asked her when they could install our Internet. To my surprise, she replied within two days.

We got the 50 Mbps with Cable Cignal TV package for P2,399/month. One afternoon, all four of us were streaming. My wife was in a Zoom meeting, I was watching Netflix on the TV, our two girls were watching YouTube/TikTok on their laptops, and our respective cell phones were active with Messenger and Viber messages. Streaming was continuous, without interruption. We are happy. Good service, Red Fiber.

OUTGOING SECRETARIES
The Duterte government and its chiefs of cabinets will leave on June 30. I want to compliment two of the business friendly secretaries.

First, Energy Minister Alfonso Cusi. He opposed the mandatory energy mix, such as 30-30-30-10 for coal-wet gas-renewable oil that his two predecessors imposed. Those who need to determine the right energy mix should be the consumers, not the Department of Energy (DoE) or Malacañang, not Congress or the Energy Regulatory Commission (ERC), not the climate activists or the media. He also opposed oil price controls and the revival of the Oil Price Stabilization Fund (OPSF).

The second is Secretary of Commerce and Industry, Ramon Lopez. He championed the de-bureaucratization of business registration through the Ease of Doing Business Act and related policies. He supported stronger intellectual property rights (IPR) to increase consumer awareness of product brands. In 2019, I hosted a regional conference in Makati on IPR and health innovation in ASEAN, then, together with the Foundation for Economic Freedom (FEF), co-hosted the global launch of the International Property Rights Index (IPRI) 2019. In both international events, I invited Secretary Mon as Keynote Speaker, he agreed and came to the two events. Thanks again, Secretary Mon.