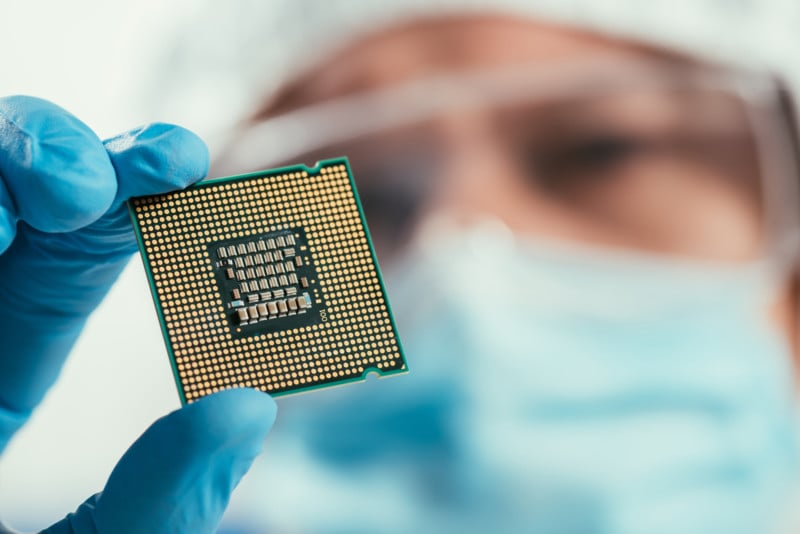 Engineers at Penn State University have created a chip that can process and classify nearly two billion images per second.

Penn Engineering today reports that a team of researchers — including Farshid Ashtiani, Alexander J. Geers and Firooz Aflatouni — developed the chip that is smaller than a square centimeter.

The chip can perform a full image classification in about half a nanosecond, all without the need for a separate processor or memory unit.

In traditional artificial intelligence (AI) systems used for image recognition, the image of the target object is first formed on an image sensor, such as the digital camera in a smartphone.

The image sensor then converts light into electrical signals and finally into binary data. Only then can the system ‘understand’ the image enough to process, analyze, store and classify it with computer chips.

The current speed limit of these technologies is determined by the clock-based scheme of computational steps in a computer processor, with calculations taking place one after the other according to a linear scheme.

Penn State engineers have created the first scalable chip that classifies and recognizes images almost instantly — by designing a workaround that removes the most time-consuming aspects of traditional chip-based AI image processing.

Their 9.3-square-millimeter custom processor directly processes light received from an “object of interest” using what they call an “optical deep neural network.”

Information passes through the layers, with each step helping to classify the input image into one of the learned categories.

Thanks to the chip’s ability to compute as light travels through it to directly read and process optical signals, the researchers claim the chip doesn’t need to store information and can perform a full image classification in about half a nanosecond.

“We are not the first to come up with technology that reads optical signals directly, but we are the first to create the complete system within a chip that is both compatible with existing technology and scalable to work with more complex data,” says Geers.

The team expects the work to have applications for automatically detecting text in photos, helping self-driving cars recognize obstacles and other computer vision tasks.

AI has changed the world of camera technology in recent months. Earlier this year, scientists developed an AI camera that can shoot full color in total darkness.

This week, Camero-Tech has announced its latest AI-powered detection systemthe Xaver 1000, which allows soldiers to see through walls before attacking.