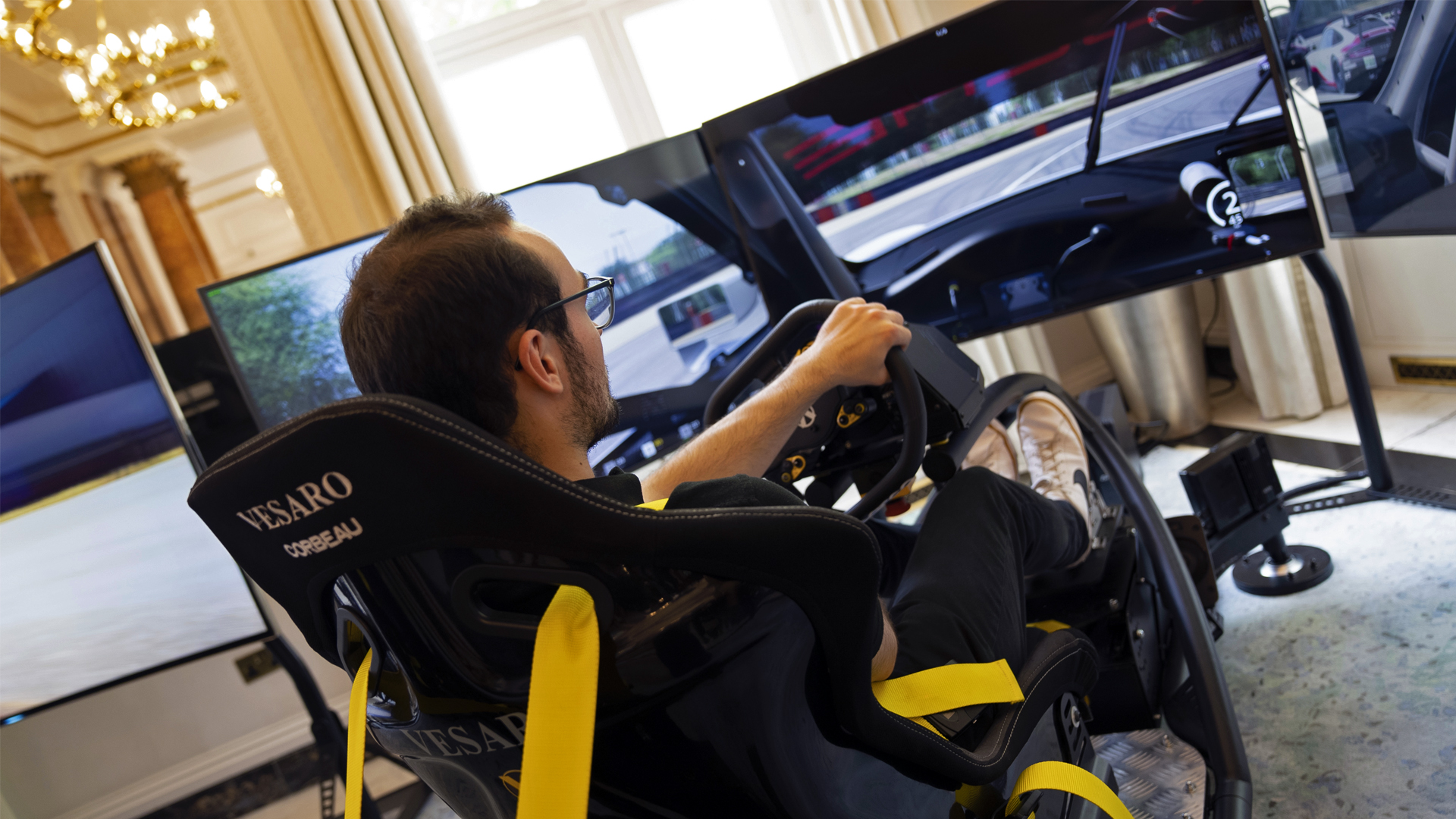 Having recently tested the upcoming G5 haptic feedback and motion system for sim racing, we are more convinced than ever that the worlds of sim racing and motorsport are merging.

In the world of sim racing, we are constantly striving for ultimate immersion. Using technology to recreate the sensations a driver can experience in the real world is an important element, and over the years various forms of technology have been continuously developed in the pursuit of realism.

Virtual reality, wind generation, direct drive wheelbases and hydraulic pedals. All these elements are designed with one main goal: to bring sim racing as close to motorsport as possible.

It’s also fair to say that in many cases the level of immersion correlates with a driver’s driving pleasure. Of course, not everyone has the ability to propel a Formula 1 car through the streets of Monte Carlo without hitting the barriers, but even if the cars themselves need to be somewhat accessible, most will still enjoy the realistic physical sensations provided by their chosen hardware.

One of the biggest differences between virtual and reality is movement. Even driving down the Mulsanne Straight at 230mph in a game will keep you still. That is, if you’re not using a motion simulator.

Motion rigs come in all shapes and sizes, and in the same vein as automotive development, different companies are constantly trying to develop unique methods of optimizing the experience. A popular choice is the use of haptic technology through motors and actuators.

In simple terms, in a sim racing context, haptic technology uses a combination of movement, vibration and texture to give the user realistic physical sensations in a virtual environment.

A leader in this segment is the Canadian company D-BOXwhich specializes in the implementation of haptic technology in various forms, ranging from amusement parks and cinema seats to home entertainment systems and of course sim racing cockpits.

At a recent event, I was able to try out both the current Gen 3 motion system and the upcoming Gen 5 concept. Both setups use the same four-point actuator design (one on each corner), and while both offer a similar experience in practice, the latest creation is more refined and compact in design. In either case, the idea is to add a sensory overload when racing in a virtual environment.

First, I put the G3 system to the test by tackling one of Greece’s most demanding stages on DiRT Rally 2.0 in a Subaru Impreza World Rally Car.

I’ve experienced motion platforms before, but this one specifically felt refined and sorted right out of the box. Every specific feature in the game, such as water splashes, rocky sections, jumps and elevation changes, gave me a unique thrill.

This should come as no surprise, given the high reliability of the D-BOX system. It speaks directly to the game’s software and creates a custom combination of feedback for each individual ‘event’.

“When you feel the car sliding through the corners, the brain really goes back to the environment it’s in during a rally, so you just feel like you haven’t left the car,” explains rally driver Louise Cook, who attended was to show me the ropes.

While she is aiming for a career in the World Rally Championship and is currently in the process of closing a deal for the upcoming Rally Finland, Cook also creates sim rally video content for her YouTube channel, some of which has been viewed more than nine million times.

“Using the haptic technology really replicates all the intense rally sensations that a driver relies on. My favorite part of rallying is the jumps, so the fact that you can mimic that [with this system] is a great help.”

Then it was time to try out the latest G5 system with Assetto Corsa† The element that really stood out to me here were the bumps in the road and the sideways movement through the corners.

On the longer straights, like the Döttinger Höhe of the Nürburgring Nordschleife, each bump started to feel more pronounced as I got more speed, which helped convey the sense of speed.

As I applied the brakes for the corners, the tightly fastened seat belts worked with the movement of the seat to give that distinct feeling of braking power. Lockups were communicated through texture and vibration, understeer and oversteer through motion. It wasn’t as visceral as the rally experience, but that’s how it should be.

Of course, there were still elements that I think could realistically be improved upon. Extra belt tension and movement would increase realism under braking, some extra subtle high speed vibrations through the base of the seat and indeed the pedals would have a similar effect.

I think if you combined this high-fidelity, haptic-based movement with extras like wind generation and some form of more realistic sound simulation, you’d be well on your way to maximizing the potential of simrace technology.

As this develops, so will the synergy between digital and analog motorsport. Haptic technology doesn’t just provide perfect immersion in sim racing. However, it makes a noticeable step forward toward the thrills of real-world driving.

Not only did I feel more connected than ever to the virtual car beneath me, but I also loved using it. After all, Sim racing should also be fun.

While I haven’t seen this technology appearing in most living rooms in quite some time, given its overall cost and complexity, I can certainly see it being a fantastic option for driver training, experience centers – it will be used for officially licensed F1 venues coming soon – and those with no budget constraints looking for the most immersive possible experience available.

On a macro level, I don’t think sim racing can ever give us full realism, both physically and mentally. It will never fully transmit the intense g-forces, nor be able to safely mimic the very real feeling of fear, but it does offer you a practical and accessible alternative to driving a race car.

Advances like haptic technology are bringing us closer and closer to reality in the areas where it’s really possible to get close, and we’re now at the point where the bonds are strong enough that one can directly affect the other.