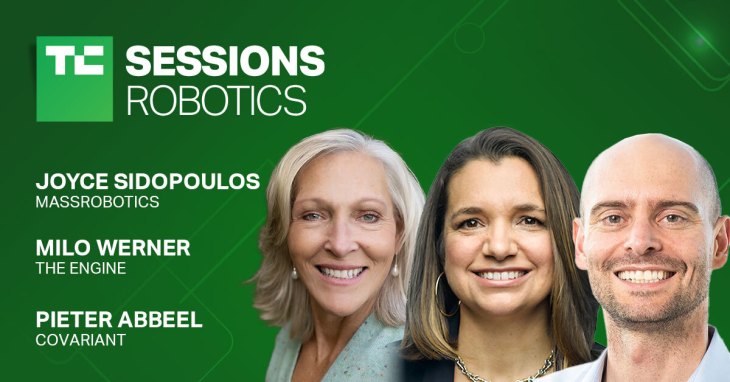 Taking an idea from the R&D stage in a lab to successful commercialization goes a long way, especially when you’re talking about technologies as complex and costly as robotics and artificial intelligence.

Robotics startups need expensive equipment — such as industrial-grade sensors, 3D printers and controlled environments — to build and test prototypes. And even though robotics is weathering the current slowdown in venture capital better than other tech sectors, it’s still too easy for innovative inventions to get stuck in the lab.

That’s why we’re delighted to welcome three experts in the process of TC Sessions: Robotics on July 21: Pieter Abbeel, co-founder and chief scientist at Covariant; Joyce Sidopoulos, co-founder and VP of programs and community at MassRobotics; and Milo Werner, general partner at The Engine.

In a session titled “From Cage to Stage: Commercializing AI and Robotics,” the panel will share their significant experience of what it takes to take a robot or AI process from the lab to the market.

Here’s what our panelists bring to the table and why we can’t wait to hear their thoughts on the topic.

Abbeel, one of the founders of AIX Ventures, a VC firm that focuses on AI startups, also hosts the podcast The Robot Brains, which explores what AI and robotics can do today and where they are headed.

As co-founder and vice president for programs and community at MassRobotics — whose mission is to enable and grow the next generation of robotics companies — Joyce Sidopoulos develops powerful programs for the robotics ecosystem. She matches startups with potential funders and clients, connects students and talent with potential employers, and collaborates with academia to commercialize research.

Previously, Sidopoulos was the innovation and robotics community manager for the Massachusetts Technology Leadership Council to expand the robotics ecosystem in Massachusetts and the New England region, leading to the creation of MassRobotics.

Milo Werner is a general partner at The Engine, a VC firm that helps deep tech companies bridge the gap between discovery and commercialization. Previously, she was a partner at Ajax Strategies, where she led midstage investments in energy, transportation, agriculture and industrial applications.

Werner holds a BS in Geology and Civil and Environmental Engineering from the University of Vermont, an MS in Civil Engineering and an MBA from the Massachusetts Institute of Technology.

TC Sessions: Robotics is a free online event that takes place on July 21. You can follow all sessions and join the robotics community online for quick networking, chats and face-to-face meetings. just register here for free†